Ah, Star Wars Day.  The day that was created by fans to celebrate the universe they love.  Whether you are holding a Star Wars movie marathon, drinking blue milk, or finally getting that rebel alliance tattoo, make sure you take a moment to remember all those poor rebels that died stealing the Death Star Plans from those Imperial scum.  One of the things we like to do celebrate May the 4th is take advantage of some of the discounts available around the web on cool Star Wars gear and collectibles.  Here are some links from a few sites that will lead you to some great Star Wars Day savings:

StarWars.com has provided a plethora of great gaming deals that we will definitely be checking out.  You can see the deals for yourself here – Star Wars Gaming Deals.  Some of the highlights include:

If you’re looking to increase your cosplay wardrobe for May the Fourth, head on over to Anovos.com and get 15% off Star Wars items.  Our favorites are:

Have you ever wanted cosplay and camp at the same time?  Well now you can (if you’re a kid that is).  Selk’Bag makes Star Wars themed sleeping bags complete with formed arms and sleeves… you can even get booties for those late night bathroom excursions.  These are a must for any Star Wars fan.  Although we can’t help but feel they are missing an opportunity by not having a Tauntaun option!  Check them out here – Star Wars Selk’Bag.

If that’s not enough, here are a few other cool things we have found for this year’s celebration:

If you haven’t grabbed any of the Black Series figures yet, you are really missing out.  These 6″ figures are better crafted and are much more detailed than the standard figures.  This ThinkGeek: 4-pack of Clone Troopers is currently 30% off over at ThinkGeek. 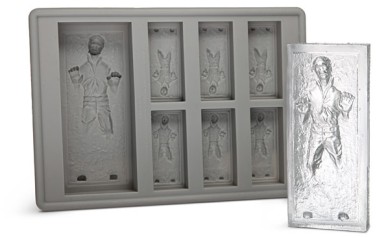 This finely detailed 6″ snowtrooper looks he ready for a full-on secret rebel base assault.  He’s currently 13% over at Amazon.

It’s never to early to introduce the little ones to the Star Wars Universe, and what better way to get them started than with everybody’s favorite father – Darth Vader.  At 43% off, it’s hard to pass up!  See for yourself at ThinkGeek.